Rainy Day Movie list for those who enjoy hardcore bitches!

Do you enjoy watching hardcore bitches?  I do!  So I've made a list of My favorite movies that have really pleased Me in that arena... so you can enjoy some you may have missed. In a patriarchal culture it may be more rare to see these fabulous hardcore women, busting ass and taking names, but every now and then Hollywood caters to what we want to see!  Disclaimer: I enjoy gory movies.  I am also including movies wherein our female heroine gets killed in interest of goodness, or changes her ways in the end... this does not change how wonderful it can be to watch her gorgeous tyranny for the rest of the movie!

When 11 of her friends are raped and murdered, leaving the Samurai Princess (adult video star Aino Kishi) the only survivor, she becomes infused with her comrades' souls. Transformed into an android, she sets out to avenge their deaths. Dai Mizuno co-stars as the princess's human partner in this Kengo Kaji-directed gore fest that features breast grenades, detachable chainsaw limbs, deadly guitar riffs and more.

Countess Dracula
This Hammer Productions cult classic stars Ingrid Pitt as Elisabeth, a countess who discovers that the blood of young virgins can restore her fading beauty. Her twisted lover, Captain Dobi (Nigel Green), is happy to keep her in supply.  Captain Dobi serves the Countess even murdering his ex-lovers to keep her happy.  Ingrid Pitt is DELECTABLE in this film. 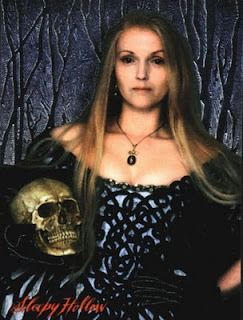 alien resurrection
In the third chapter of this sci-fi saga, Lt. Ripley (Sigourney Weaver) is the lone survivor when her spaceship crashes on a planet inhabited by former prison inmates. Her fears that an alien was aboard her craft are confirmed when bodies begin to pile up. But as Ripley tries to lead the inmates into battle against the creature, she makes another horrifying discovery.  Sigourney Weaver is tight leather clad killing machine with lesbian tendencies... need I say more?

the descent 1 and 2
Six girlfriends, led by thrill seeker Juno (Natalie Mendoza), go spelunking a year after a tragic incident. But when they get trapped under the earth, all rationale escapes them as they start to suffer from limited oxygen and delusions -- or are they? Now, the friends must find a way to escape the cave and the murky creatures that lie within it. Beautiful self preserving women in brutal action.

High tension
Students Marie (Cécile de France) and Alex (Maïwenn Le Besco) have no idea of the horrors that await them when they head off to a remote country home to study for their upcoming exams and a psychopathic stranger attacks, tying up Alex and taking her away. It's up to Marie to save her friend -- but first, she must figure out what's really going on. Philippe Nahon co-stars in this twisty-turny tale of terror.

Happy Hooker
Dutch ingenue Xaviera Hollander (Lynn Redgrave) moves to New York, where she takes an office job. Soon, she's jumping from bed to bed with her male co-workers and decides to put her sexual success to work for her in her own call-girl business.  This sounds like a terrible movie but Lynn Redgrave is a hardcore Harlow-esque hustler.  Her simple powerful presence walking in her fur coat is breathtaking.

The Proposal
When she learns she's in danger of losing her visa status and being deported, overbearing book editor Margaret Tate (Sandra Bullock, in a Golden Globe-nominated role) forces her put-upon assistant, Andrew Paxton (Ryan Reynolds), to marry her. Andrew is basically her slave for the first part of the film... very satisfying to watch Ryan Reynolds in this role;)  And WHAT A CUTE COVER!!!

Faster Pussycat Kill! Kill!
Russ Meyer's 1960s exploitation film, a campy cult favorite, follows three tough go-go dancers -- Amber (Lori Williams), Janine (Haji) and Varla (Tura Satana) -- on a thrill-seeking rampage through the desert that runs the gamut from seduction and kidnapping to thieving and murder. Enough cannot be said about this film, Russ Meyer is a famous submissive.  Tura's performance is so luxuriously evil, though all the women are gorgeous bitches.  Her catsuit, leather gloves, beatdowns, and compelling stare are some of the greatest gifts in the world.   Fabulous.

Want to see a hardcore bitch in action?  What are you doing this Sunday?  Are you worthy to be in the presence of a real life bitch goddess?  Put in your request.
Posted by Mistress Devlynn DeSade at 5:48 PM