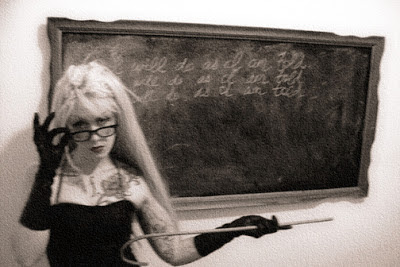 The truth is most males want to please Me. Some of the hardest parts of this journey for any woman exploring Her dominance may be :

1. What do I want?
Females are trained from birth by society to embrace everyone else's needs and serve the greater whole. Several of the new treatises on female psychology and and sexuality will reinforce to anyone the truth behind this. So it can be hard at times for the female to say, "What do I want?"


2. How do I get it?
Now this is specifically easy at times and specifically difficult at times.   Sometimes I make major breakthroughs in My slave training, and sometimes I come up against frustrating circumstances.  Usually I eventually find things not to be what I thought them to be, and I simply need to go at a so-called "problem" from a different angle.

An example of this is with My comments regarding age. I have played with, and enjoyed many older male submissives.  Because of My age, though maybe it happens to many Dominas, I get a lot of applications from younger men. There is a huge difference in playing style between the two.
Over time however, I was able to pick up on what the biggest differences were, and now I choose to train the younger ones right out of the behaviors I find annoying or distasteful right away.  I no longer expect/ assume the same behaviors, and then become disappointed, which was probably the root of the "problem".  In the end, I have younger slaves who are just as palatable to Me as the older ones,  I don't have to create a moratorium on younger hopefuls, and I of course still enjoy the older ones who are already "broken in".  Hopefully, if the younger ones ever see other Domina over the course of their lives, they will also have an unfair advantage from good, strong training, and will seem to shine to Her out over the rest in their age group.

And of course, many submissives, young and old, enjoy a good, exquisitely strict training.
Posted by Mistress Devlynn DeSade at 2:46 PM