The Lady Devlynn, by slave d. 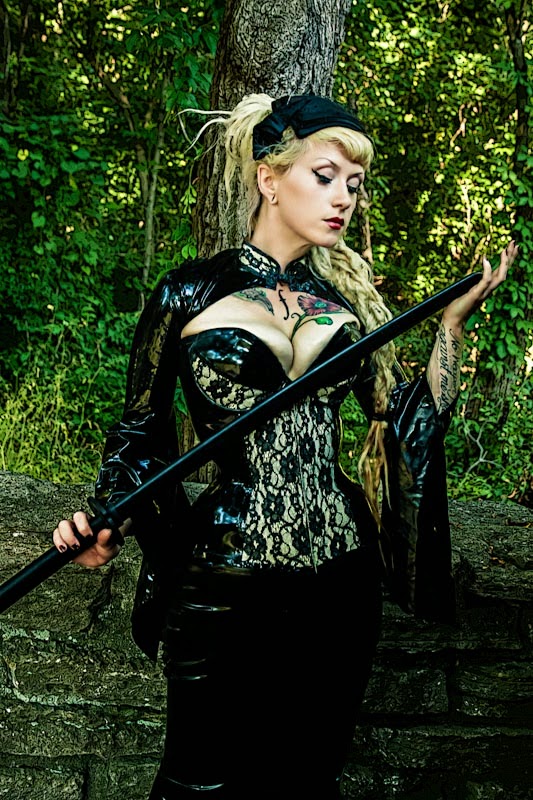 I call myself a free man.


Most, however, call me by other less than flattering names: thief, poacher, vagabond. I’m also known as a murderer to some, although the one I killed deserved more than my dagger through his eye. He was a nobleman who raped my sister. I have no family now for my sister and I were living with a friend of my father’s at the time. Both of our parents died of a fever the year before the rape.   I loved my older sister more than my life. She died while giving birth to his still born bastard son. HE died for his sins against my sister the next day.  I was a boy at the time, only 16. In my heart I know that I am innocent of murder for he had it coming and I have never killed anyone else before or since.  However, the local magistrate who issued a warrant for my arrest and hanging saw things differently. That was four years ago. I have been living in the forest ever since.

As a child my grandmother taught me which plants were edible and my father, who had been one of the Kings archers before losing his left hand in battle, taught me the bow.  I can provide for myself. I kneel to NO man nor will I ever. If that is not free then what is? Little did I know, however, that on this day I WOULD kneel to a woman.  But for the moment I suspected that soon I would be dead.

I’ll explain:  you see, I had ventured several days walk from my normal territory when I came upon a small lake deep in the wood. The water was so clear I could see further down than twice the height of a man and it tasted sweeter than any I could recall.  I took out my fishing line and bone hook, flipped over a large rock and found an earth worm. In no time I had a fat catfish. As I was walking through the under growth searching for dead wood for a fire to cook my breakfast suddenly there was a loud whoosh: leaves and twigs EXPLODED all around and here I am, suspended maybe six feet off the ground completely encased in large net. I suspect that the local nobleman has set this man trap for poachers like me. I’m sure I will be taken to the local sheriff and it’s the noose for me. I hope my neck breaks cleanly. I have seen poor souls languish for more than an hour from the gallows. I once saw a man’s neck stretch to twice its normal length, his eyes bulging, face turning purple, lips opening and closing like a fish out of water as he kicked and struggled for maybe fifteen horrible minutes. The more I thought of this fate the more I considered plunging my dagger into my throat. Bleeding out would be much less painful. If only I could get to it. But my arms were completely pinned against my body.

That was when SHE appeared. It was as if she morphed out of the greenery like a waif. She was the most beautiful woman I had ever seen!  The morning sun gleamed from her long, braided, blond hair. Her eyes were enchanting. She was clothed in the most exquisitely black smooth leather. But what chilled me was that she was also carrying an extremely sharp and dangerous looking sword!  She circled beneath me looking up. I was reminded of a cat circling a tree while looking up at a small bird in its branches. But, in my case I could not simply jump and fly to safety. I was trapped like a moth in a web! I couldn’t take the tension any longer, “Hello Miss, they call me Evan, would you please help me down from here?”  A quiet but ominous reply, “I KNOW who you are, that is the ONLY reason you still breathe. I also know why you have banished yourself to the forests. You killed Lord Melville, such a vile and corrupt swine. If you had not killed him I would have. For saving me the trouble I salute you and have for the moment granted you pardon. I am The Lady Devlynn and that is how you will address me if you wish to continue living! You have stolen one of my fish boy!” emphasizing her words with the point of her sword to my rump. I had heard of this lovely lady somewhere, suddenly a chill flashed from my stomach through my thighs: “I’ve heard of you, I heard that you’re a witch! Please don’t curse me or put a spell on me Lady Devlynn?!”

“Tis true, some CALL me a witch. However, to you I will say, I am no witch; I am a student, a seeker and practitioner of the knowledge of the ancient ones who used to occupy these forests. My abilities only appear to be magical to the ignorant and the stupid, for that reason I have been labeled a witch and must lead a secret life.  ENOUGH talk of ME! You are MY prisoner and as payment for your thievery you will become oath bound to me or die!  I’m going to let you down. If you run I WILL find you and I will castrate you! Do you understand!?” “Yes, Lady Devlynn!” Without further word she walked over to the base of the tree I was suspended from, reached up high on the rope with her left hand and with the other flicked her sword downward severing the rope.  I felt myself sliding toward the ground but with her hanging to the other end of the rope I came down slowly enough that I did not get hurt. The lovely Lady then slid down the rope dropping the last five or six feet to the ground. She immediately bounded over placing her sword tip beneath my chin. I was sitting now. She commanded, “Slowly pull the net away from your body and stand. I did as ordered. “Do not speak! Hhmmm, you are rather slight of build, but I have heard from one of my slaves who has been tracking you that you recently killed a goose at nearly 140 paces with your bow. That is an impressive feat.  Remove your clothing. I want a better look at you.” I was frozen with fear. In a menacing voice, “I WON’T repeat myself, if you don’t comply NOW I will remove your head!”

Quickly I unfastened my rope from my waste and pulled my tunic up and over my head dropping it to my feet. Her eyes scrutinized me. “You are quite fit. I will give you a chance to prove your worthiness to me.  I command an army of slaves. With them I conduct a secret war against villainy, tyranny and corruption. You will swear allegiance to me and become one of them.  “Drop to your knees boy!” “Yes lady Devlynn!” “Do you swear to obey and serve me to the best of your ability until such time as I grant you freedom or your death?” “Yes Lady Devlynn.” ” Good, now kiss my foot slave”.  As I was kissing her lovely black boot my new Mistress continued, “ From this day forward when summoned for a task you will come at greatest possible speed to this location or to the location my courier specifies. I will always give your task in person. Typically your task will be the elimination of a person who has proven to be exceptionally wicked and beyond the reach of conventional justice. Unless otherwise specified you will be given one month to accomplish your task. Refusal of an order is punishable by death. Lesser offenses will result in a flogging or caning by me!  For your first task I require you to build a medium sized fire, a little larger then a cooking fire. Do this NOW! I will return within an hour and it better be ready! With this she disappeared into the forest. 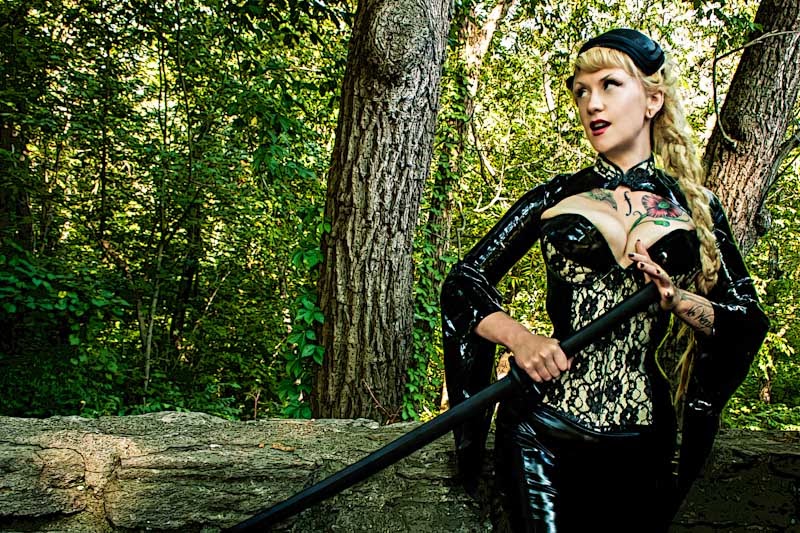 Quickly I gathered together tinder and wood. I rummaged through my belt pouch for my flints and  cattail fluff. Soon I had captured a spark, a few gentle puffs later my fire was going. Within about ten minutes I had a nice blaze. I placed some larger logs and soon they caught as well.  Then Lady Devlynn returned. She was carrying an iron rod with a capitol letter “D” about an inch in height fashioned at the end. Placing the end into the fire she told me, “I’m going to give you my mark. I will give you something to bite down on so you don’t scream”. My Lady walked to me, “Open your mouth.” She thrust in a rolled piece of leather. “Now keep it in place.  Turn around I wish to see your bottom. Good, I think I’ll put my mark to your left cheek.   After maybe ten minutes she picked up the rod. She brought the orange glowing “D” to my face. I could feel the heat easily from a foot away. I was terrified now! She could tell. Don’t be afraid. It will be over soon. Picking up my tunic and tossing it over a fallen tree she commanded, “ lie over your tunic with your bottom at the highest point”.  Following she placed a hand to the small of my back and in a surprisingly kind voice, “Ok now, be very still, close your eyes and bite down as hard as you can.” I did as ordered. I suddenly felt warmth to the left of my butt. It went from warm to WARMER to HOT then……, “UUUHHHHMMMM!!!!” I screamed as hard as I could but with the leather bitten down firmly my scream was much muffled. The pain was HORRIBLE! Tears were flooding from my eyes despite being tightly closed.

I felt a warm soft hand caressing my lower back and a soothing voice, “There, there, it’s all over.  You’ve been very good, close your eyes and rest. Today I will take care of YOU my new slave. “
Posted by Mistress Devlynn DeSade at 12:28 PM