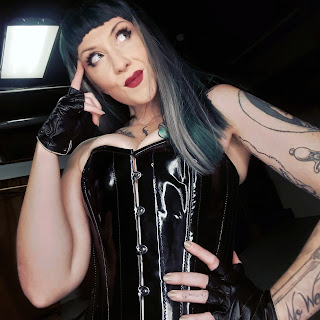 I will be taking a much needed vacation in February.
Last available appointment spots before then are:
Friday 7pm January 24
Saturday 1pm, 3pm, January 25
Tuesday 1pm, 3pm, 6pm, January 28
Have you seen My new dungeon? 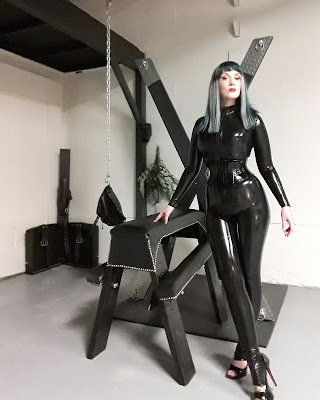 Posted by Mistress Devlynn DeSade at 8:41 AM

A Special Visit to
Mistress Devlynn Desade’s New Dungeon
by “slave buttons”
It was a much-anticipated training session that had been planned for a long time. I had been to the new dungeon when she first started to set it up, so I was eager to see the many changes that she had completed. When parking the car in the easy to find place, I became very anxious to see Mistress Desade.
As I entered the door to her new dungeon, Mistress Devlynn, greeted me by calling me, “slave buttons”!  Mistress Devlynn was wearing a very sexy tight-fitting leather outfit that served as a very short skirt.  She had on a pair of nylons that were held up by her garter belt. Her shoulders were bare and the top barely covered her beautiful breast.  She had long brown hair at shoulders length. OMG, I was so lucky to be at her dungeon and getting ready to serve her as “slave buttons”. The front room was very comforting with areas for serving wine and other drinks during parties. Mistress explained, she is going to have special parties in her new dungeon and she wants her guest to feel very welcome.  She even has a special area with lockers for slaves to put their belongings!
Mistress Devlynn calls me “slave buttons” because my nipples are so erotically sensitive and tweaking them, she zones me out quickly.  Mistress enjoys tweaking my nipples for my pleasure, but it is usually a set up as she prepares to torture them. Mistress also refers to my cock head as another “button”. She often refers to it as another “little button” that needs attention!
She emphasizes “little “!!!!
After a brief talk about any health conditions and any new problems, I was instructed to go into the slave bathroom and remove all my clothes. I was instructed to place all my belongings in a plastic container, then come into the dungeon.
The new dungeon is surprising a very large room with a variety of dungeon apparatus. There are numerous padded low benches, suitable for tying up slaves. There is a huge apparatus for hanging a slave by his or her wrist.  In addition to a large area for use of folding chairs during BDSM demonstrations. Among an assortment of other apparatus, there was a huge low plastic covered bench. Plastic so it could easily be kept clean. All of Mistress toys are kept exceptionally clean and sterile.
I was instructed to lie on my back on the plastic covered bench. Mistress proceeded to rope tie me spread eagle, with arms and legs spread wide. I was completely exposed. She wanted to spread my legs even wider by tying my thighs and pulling them toward the sides of the bench to spread me even further exposing my cock and balls.
I was fortunate to have a special view under Mistress short leather skirt, while being tied and as she walked around the bench. The view of her white thighs above her stockings and the partial edge of her beautiful ass cheeks was an awesome site! Mistress then moved over the foot of the bench a special lighting device to allow her to take pictures and videos of “slave buttons” totally exposed and vulnerable.  Since I was laying on my back, I could not see what she was doing, unless she stood or kneeled by my head.
She began torturing my exposed cock and balls with clamps and the needle wheel. She remarked, it looks like this “little button” is waking up. It was not her intention to give pleasure, but instead, she wanted the “little button” to be subjected to abuse and torment.
Next, she removed the leather dress. She stood by the head of the bench, so I could see her. While standing next to me she then knelt on the bench and the view of her in her leather bra and bikini leather panties was totally awesome.  I knew I was in for extra torment for being such a lucky slave.
Mistress then tweaked my nipples to warm me up, then reminded me, she was in total control, by painfully twisting my swollen nipples.  While kneeling over my head , she knew I was her helplessly bound slave as she put clamps on my nipples.
She put weights on the clamps, when she released the weights, my nipples were pulled sideways and down towards the bench.  The pain was strong and Mistress was pleased that “slave buttons” took the pain. I do not know if she took pictures or videos of the torments. Most of the time, Mistress was kneeling over my head and my view was limited to her beautiful leather panty covered ass.  As a faithful and lucky slave, I was totally under her control and willingly accepting her use of my body for her amusement. I believe she was taking numerous pictures and videos, for her to post on twitter, her blog and on her “my fan” special postings. She also said she would email some to me for my eyes only!
Time went by so fast while under her spell.... (edit to original here)

My special treat came as a surprise. Mistress said open your mouth wide. She then pulled aside her leather panties and gave me a “golden nectar” drink, a total mouthful.   Since she was so close to my mouth, I was unable to view from where the “golden nectar” was coming. I hope, because I am a long-time faithful slave, I get opportunities like this again. Maybe from Mistress when she is a little higher away and offers an exceptional view of from where the shower or drink originates???  Mistress, could then refer to “slave buttons” as her “golden nectar slave buttons”!
Mistress was pleased that “slave buttons” served her well. After untying me, she directed me to go to the slave bathroom and get dressed.  Once I was dressed and ready to leave, Mistress, allowed a time to talk to her about future training sessions. After a parting hug, I left the building with many awesome memories and a compelling desire to return ASAP.
As always, a training session with Mistress Devlynn Desade is an exceptional experience!  One has to experience it to understand!!! 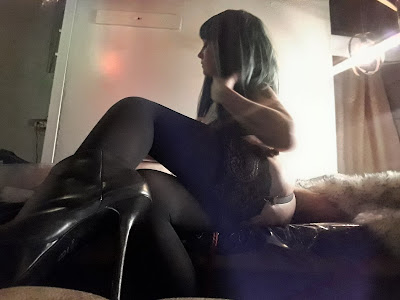 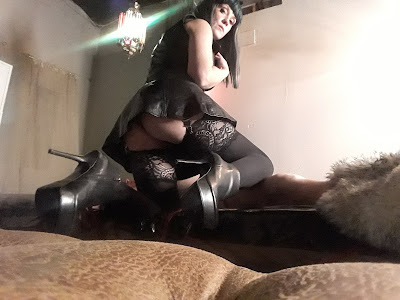 Posted by Mistress Devlynn DeSade at 11:11 AM